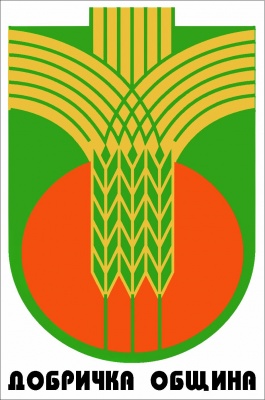 The coat of arms of the Municipality of Dobrich was created by the artist Elena Ivanova Docheva after a competition by the Municipality and was approved by Decision № 368 of September 29, 1998. The coat of arms is a slender plastic composition of symbols in three colors for Dobrudja, in the center of which it is located.
The main part of the coat of arms resembles a shield - a classic symbol of a fortress or guarded place. In the middle of the coat of arms is depicted an orange sun - a source of warmth and life.
In the middle of the sun passes a sheaf of wheat ears, colored in green and yellow. Symbol messages ...
Here - on Dobrudzha land, more than 1320 years ago Khan Asparuh built the first Bulgarian fortified settlements and laid the foundations of the First Bulgarian State. The sheaf is a symbol of the unity and greatness of the Bulgarian people.
The wheat ears are a symbol of fertility, of the generosity of our Dobrudzha land.
Parallel lines in green and yellow, which symbolize the diligence of the people of the municipality, emerge from the wheat ears like furrows in plowed fields and branch to infinity.